Throughout history we see the desire man has had to create a space that has beauty and that reflects the traditions, ideas and philosophy that he/she has.

The earliest paint workshop was discovered Circa 100,000 BCE in South Africa where early man started mixing colors to beautify himself and his surroundings. Later details of cave paintings and figurative art started coming into fruition. 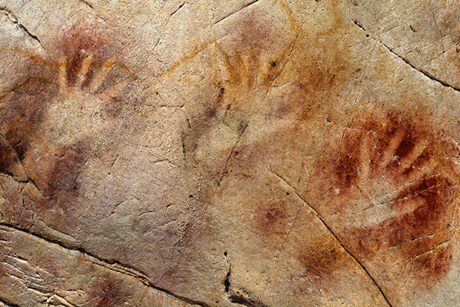 Detail of the “Panel of Hands” from the El Castillo Cave (Photo Courtesy of the University of Bristol).

Ceramic tiles have been in existence for 4000 years..and  along with pottery have had an important role in helping us discovery many, many civilizations and traditions from ancient times long gone.

The interesting thing about pottery (along with tiles) is that “as one archeologist put it, pottery may be easy to break but it’s hard to destroy.”

For hundreds of years layer upon layer of debris and trash from past civilizations all over the earth, each showing us the characteristics and ways of life of the people who discarded them. How they produced these, how they presented them, the colors and types of glazes they used, all help us to understand the indelible styles different civilizations used to portray their art, their style and their ideas.

For example see here is a paragraph I found in historical literature..

“Some beautiful Syrian tiles painted with undulating flowers and patterns in the Chinese style decorate to this day the early 15th-century tomb of al-Tawrizi, in Damascus. More extraordinary, the same—or very similar—tiles are found in the Murad II mosque at Adrianople, on the modern frontier between Greece and Turkey. This mosque was built by the Ottoman Turks in 1433 and the striking resemblance between its tiles and those in Damascus suggests that they were almost certainly made by imported Syrian craftsmen.”

In any case, from the research done so far it seems that the earliest tiles that were found are form roof tiles in the third millennium, which  is a period of time that began on January 1, 2001, and ended on December 31, 3000, of the Gregorian calendar.  This eventually brought in the need for stone walls which could be the only support offered to a heavy tiles roof.